On May 17, 1977, my husband and I, his girls, and our baby lived around the corner from the 21st East Area Rapist victims.

My middle step-daughter babysat for them on a regular basis.  My stepdaughter told me before it happened, that the woman was terrified of being one of his victims; as if she sensed it.

Once I was over to the house in question when my stepdaughter was babysitting (I don’t remember why).  I noticed that the front door had numerous deadbolts. The house butted up to the levee along the American River in Carmichael on Sandbar Circle (we lived on the corner on McClaren Drive).

On this night, my husband and I had visited some friends.  While there we discussed the East Area Rapist (it was a terrifying time, and a topic of conversation for many).  We got home around 10 pm.  I remember feeling strange, as if he was around.  I couldn’t wait to get into the house.  It should be noted that we had booby trapped our staircase; my former brother-in-law even talked about staking himself out on the roof to watch for the Rapist.  That’s how great the fear was in our house.

Later that night around the time of the incident, I was up with my two-month old baby.  I remember hearing voices, so I looked out the window of the middle, upstairs bedroom.  I saw swarms of men in suits all over the the house in question and in the street.  Soon, someone knocked on our front door.  It was two plain, clothed detectives canvasing the neighborhood.  That’s when I learned that the East Area Rapist WAS around when I got out of the car earlier!  My instincts were correct.

The next day I learned that the Rapist threatened to kill his next victims (I had heard he was going to mutilate them).  I was so terrified for me and my baby that I booked a flight to my brother’s house in Southern California, and stayed a few days to calm down.

So to get on with this, the following is an account of the attack on the 21st victim of the East Area Rapist, on 5-17-77. It is so graphic, and so full of information that I have spent all these years wondering about.  It’s terrifying to read.
.
Finally, always keep your doors, windows, and gates locked, because you never know who might be lurking.  This is not meant to cause fear, but to encourage precautions, and to ALWAYS listen to your instincts.

NOTE:  I do not believe the guy they have in custody is the REAL East Area Rapist, but a patsy to boost Sacramento District Attorney Anne Marie Schubert’s political chances:

“I think Schubert is using this to advance her flagging campaign for re-election.  She has taken serious heat for not filing charges against the 2 officers who shot Clark.  Front and center now, she is capitalizing on this arrest and appears to be taking credit for “her team” who arrested him.  Just another smoke screen . . .”

“But there is a lot that does not appear to match this
suspect.  I have followed this case for a number of years
and watched and read all the forensics that were being built
to try and identify this guy.  First, two women who
survived identified him as having blond hair and blue
eyes.  Second, the latest forensic info that came out by
the FBI about a year ago was that certain commercial paint
debris was collected at one of the crime scenes and could
only have come from someone in the construction trade.
That fits perfectly the killers operating procedures.  A
construction worker of an advanced level moved around
California in all the areas where his crimes have been
linked through DNA.  Santa Barbara, Orange County, Bay
Area, and of course our region.  And a construction worker
stays enough time in different areas to do the stake out and
stalking that this guy did before committing his actual
crimes.  This guy they got now worked for 27 years at a
SaveMart Distribution Center.  In order for him to fit the
crimes he must have continually relocated to all the areas
where his crimes occurred for significant periods of time so
he could plan and execute his actions.  Whoever did these
crimes was very methodical and well planned and did not act
on impulse.  And the guy they got now was married with 2
children, does not fit the MO.  I am concerned that they
are going to pin it on him so they can say they finally
caught him  by planting evidence.”

So now the Powers That Be have another patsy to cover their lies, misdeeds, and inadequacies.  And guess what, MANY people are thinking the same thing, i.e. framed.  Remember, this guy was arrested on National DNA Day, and supposedly caught by a DNA test a relative took on Ancestry.com.   That in and of itself, should speak volumes to anyone with an ability to critically think. 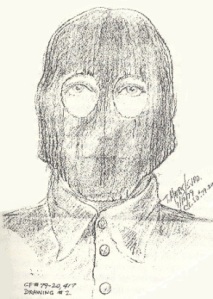